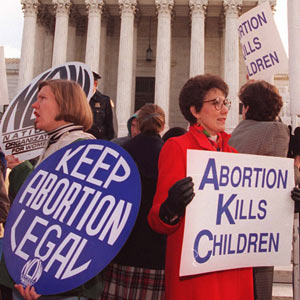 
These issues best illustrate the maxim that government which governs best is the one which governs least. Check out this from the Wall Street Journal:


"Seven in 10 Americans believe Roe v. Wade should stand, according to new data from a Wall Street Journal/NBC News poll, as the landmark Supreme Court abortion-rights ruling turns 40 on Tuesday.

"That is the highest level of support for the decision, which established a woman's right to an abortion, since polls began tracking it in 1989. The shift is mostly the result of more Democrats backing the decision—particularly Hispanics and African-Americans—and a slight uptick in support from Republicans.

"But the poll showed a consistent tension in Americans' attitudes toward the decision. Almost seven in 10 respondents say there are at least some circumstances in which they don't support abortion."

Despite superficial "states rights" and "Tenth Amendment" battle cries, most of the anti-choice crowd wants to federalize this particular issue. Slogans and petitions to "overturn Roe" usually have no idea what was actually written in that decision or how the court basically tossed the whole matter back to the states for further clarification of a multitude of unclear and contradictory laws.

I can't recall which candidate it was, but one of the GOP finalists (or maybe Romney himself) was asked about their views on privacy when the Roe decision was being discussed. The response clearly indicated they had no idea that privacy, not abortion itself, was the legal foundation for Roe vs. Wade.

I don't look for this matter to be resolved any time soon, but my guess is that if it ever gets to the federal level there will be no legal restrictions during what is commonly called the First Trimester, but the Roe language used the word "viability" as the legal threshold after which the state has an interest in protecting the interests of a potential future citizen/voter/taxpayer.

Prior to viability there is no legal reason for government, state or federal, to intervene in what is essentially a personal, private and totally intimate concern.

Meantime, the chanting continues on all sides as emotion trump reason, religion and the law.

My own position is that I find abortion morally reprehensible but I remain pro-choice. My reason is based on my conviction that behavior which is mandated, either by law, threats of reprisal, blackmail or any other external force may be unavoidable, but it does not qualify as "moral" unless the decision is made freely and responsibly.

And no, I am not convinced that "life begins at conception." If that be true, then all forms of contraception are abortifacients.

Background on the Anti-Choice Position
A recent article by Baptist pastor John Piper... We Know They Are Killing Children ... advances the anti-choice position as well as any. It is a perfect illustration of how science, medicine, morality and legality get tangled into a big unmanageable mess. It is the mission of the law to do as Solomon said, literally in this case, cut the baby in half. The issue is as old as the Hippocratic oath and remains unresolved.

Here's a post I wrote a few years ago, Abortion Cases - Roe vs. Wade - Opinion by Burger. Dig through it at your leisure. I did a lot of homework at that time. My conclusions are not arrived at arbitrarily. That's why I arrived at the same threshold the Supreme Court did at the time of the Roe decision--viability. Much has changed since then in the court systems, but none of the changes has resulted in returning the issue to a medical problem (not a legal problem) which was what prompted the original court challenge to the Texas statute.

Check out these other compelling links on abortion and the anti-choice position:


(John Ballard is a self-described child of the Sixties and unreconstructed Liberal who works in the senior care environment. Since 2002, he's been blogging on politics, health care, and innumerable other current affairs.)

Posted by Deborah White at 2:06 PM

A very interesting and informed post. I would take issue with one part, though: "And no, I am not convinced that "life begins at conception." If that be true, then all forms of contraception are abortifacients". In actuality, contraception is just that: contra-ception, interfering before conception, one way or another, such as preventing ovulation or blocking the entrance of sperm. Even emergency contraception such as Plan B does not work after conception.

Of course. That may have been deliberately provocative on my part. I was referring to that most extreme of the anti-abortion arguments that holds that even an IUD, because it acts by mechanically displacing an already-fertilized egg, triggers an abortion.

I'm not making this up. I came across this argument in the background reading of the doctor behind the "personhood" amendment that made it to the polls in Mississippi and legislative assemblies elsewhere.

Again, this is why the law has no place in the abortion question until after viability, which is a long way after conception on the journey from egg to taxpayer.

I'm no expert on doctrinal matters regarding the Roman Catholic Church, but that same extreme thinking seems to be underpinning the church's objection to all forms of birth control, including pharmaceutical contraceptives, except the rhythm method.

(And at the lunatic end of this conversation are the Quiverfull people, who even object to sterilization. But they are far enough from the mainstream to fall into the conscientious objector category.)